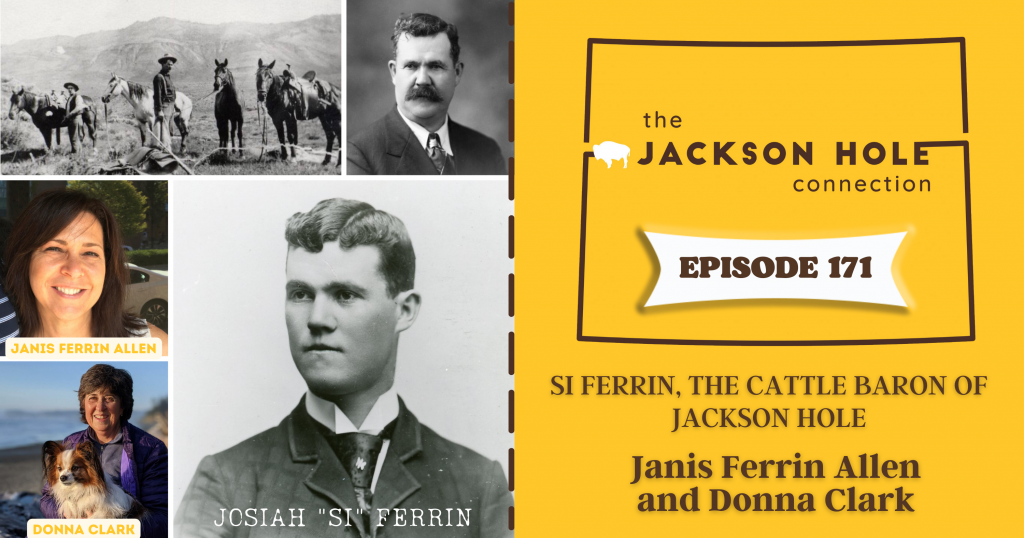 In this week’s episode of the Jackson Hole Connection, Stephan chats with Janis Ferrin Allen and Donna Clark. Janis and Donna share the same great-great-grandfather, Josiah “Si” Ferrin.  Si was one of the original homesteaders in the valley and at one time he was the largest property owner and taxpayer in Jackson Hole. In this episode, Janis and Donna talk about their family lineage and the life of Si Ferrin. They discuss how Si built up his cattle-ranching land and earned the nickname The Cattle Baron of Jackson Hole.

At the peak of land ownership, the Ferrin family had over 3,600 acres of land and 2,000 head of cattle. Foreseeing changes in the cattle industry and the struggles of ranching in a Jackson Hole, Si decided to eventually sell his property to the Snake River Land Company. Listen to this episode to find out some interesting facts about the Ferrin family, like what percentage of the Grand Teton National Park is made up of land once owned by The Ferrins. Also, find out how much 3,600 acres of land in Jackson Hole was worth back in 1928.

The Ferrins aren’t only known for cattle ranching, their family has very deep roots and history in Jackson. In the episode, Janis talks about how her grandfather helped build the first Cowboy Bar and maintained the Grand Teton Lodge Company for over 20 years. Donna’s family started a large and impactful construction company called Clark’s Ready Mix and Construction. Over 48 years Clark’s Ready Mix helped build a good portion of the infrastructure of the Jackson community.

For more information on Josiah Ferrin and the history of Elk Ranch, visit JacksonHoleHistory.org

If you’d like to connect with Janis, email janislallen@hotmail.com and Donna can be reached at donnaclark7@hotmail.com

This week’s episode is sponsored in part by Teton County Solid Waste and Recycling. Want to become a better recycler?  Well, there’s an app for that – the Recycle Coach app!  Now available for Jackson Hole locals and visitors.

Want to be a guest on The Jackson Hole Connection? Email us at connect@thejacksonholeconnection.com. Marketing and editing support by Michael Moeri (michaelmoeri.com,@thatsamoeri).